Michaelangelo’s David gets 3D printed for the Italy Pavilion

Michaelangelo’s David gets 3D printed for the Italy Pavilion

It's not the first replica of the Renaissance masterpiece, but the latest 3D-printed reproduction, to be unveiled at Expo 2020 Dubai, is unusual. Here's why.

One of the world’s most renowned nudes of the Renaissance era — Michelangelo’s David — now has a 21st century 3D-printed twin.

The resin replica of the 5.2-meter-tall (17-foot-tall) sculpture, featuring all the markings of the marble original, was created using the most advanced technologies and will be the centerpiece of the Italy Pavilion at the Expo 2020 Dubai this October. At 550 kilograms (1,200 pounds) including the base, it is 10 times lighter than the original though.

“It’s technology tied to historical memory, for future memory,” Paolo Glisenti, the Italian commissioner general for the expo told the New York Times. “History and innovation — those are the themes that interest us.”

Cecilie Hollberg, the German director of Florence’s Galleria dell’Accademia, where the original David has been standing since 1873, described the first colossal statue completed after Antiquity as representing independence, beauty, and strength. “What better choice to represent Italy, but also the rebirth of the world after COVID?” she told The Times. 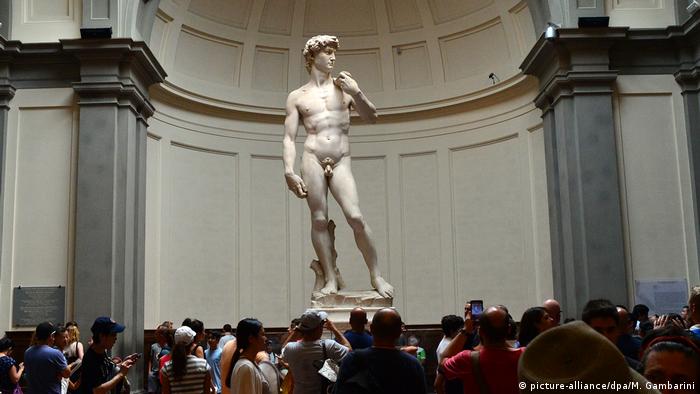 The original statue drew crowds before the pandemic

Sculpted from a stone with ‘too many imperfections’

Michelangelo sculpted his acclaimed statue between 1501 and 1504 from a single block of Carrara marble. The sculpture depicts the Biblical hero David, who slayed the giant Goliath with his sling.

That marble block had actually lain abandoned for 25 years in the courtyard of the Opera del Duomo because the two artists who were originally commissioned to work on it thought it had too many imperfections and doubted if the stone could withstand the ravages of time.

A 26-year-old Michelangelo was then brought onboard — and the rest is history.

‘Giving a soul’ to a 3D-printed copy

It has taken almost a year for an assortment of engineers, technicians, restorers, and artisans to produce David 2.0.

The project was carried out in painstaking detail in three stages. First, high-tech scanners captured the highest resolution digital versions of the statue, after which the individual parts were 3D-printed. Finally, they were put together by a team of restorers supervised by researchers from the University of Florence. 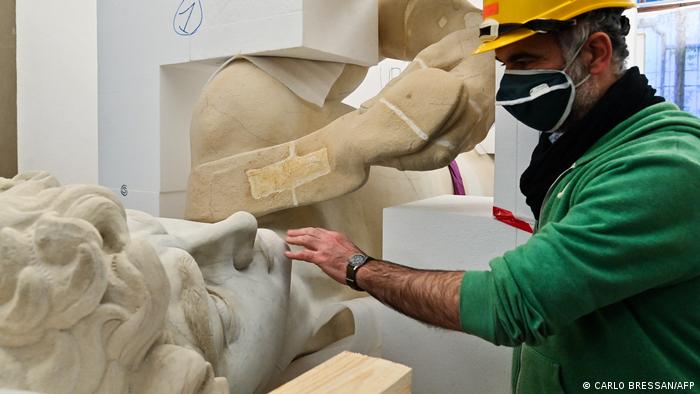 Painstaking effort was put into replicating the marble masterpiece

Nicola Salvioli, who had led the group of restorers, had explained how they rendered “the cracks, fractures, stains, abrasions, the more or less smooth parts” of the stone original onto the 3D prints “to give a soul to what is, in reality, a copy that has been transformed from digital into physical matter.”

Copies of Davids past

The statue has so many replicas worldwide that the list has its own Wikipedia page; yet this is the first copy that has been authorized by the museum, which has won a copyright battle over its top tourist draw in 2017.

Back then the Galleria dell’Accademia won a civil suit against a tour company for using an image of Florence’s famous nude without permission in its marketing materials that touted inflated tour prices of the museum. However, in response to a question about the countless David-themed souvenirs sold even in Florence, Hollberg had described them as technically “not legal, but it’s hard to get to the bottom of this.”

Digitized copies of David were already attempted as far back as 1997, when Stanford University and the University of Washington had worked on advancing 3D scanning technology.

Twenty years later, director Ridley Scott wanted a full-scale, accurate replica of David for his 2017 film Alien: Covenant, in which an android played by Michael Fassbender, was named after the sculpture.

For this, the production used the plaster cast of David, part of the collection of the Victoria and Albert Museum in London, as the basis for the film’s replica. It was scanned for eight hours, after which the various scans were merged to form a virtual copy of the sculpture. 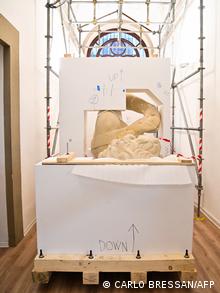 An ‘alter ego’ of the original

Artist, writer, and historian Giorgio Vasari once wrote that “no other artwork is equal to it in any respect, with such just proportion, beauty and excellence did Michelangelo finish it.”

So, what about those sniffing at the idea of this masterpiece having been replicated by a machine?

“No copy could capture the pathos of the original,” Hollberg told the Corriere della Sera newspaper. She added however that the copy could be “its messenger, its technological, artistic and artisanal alter ego.”

As its twin departs from Milan to Dubai later this month, the original David will remain in Florence, in the hope of receiving tourists once again after the COVID pandemic.

Nothing has yet been revealed about the fate of the digitized David when he returns from his stint at the Dubai Expo.

This article was originally published in DW

Philippines Pavilion is Close to Handover 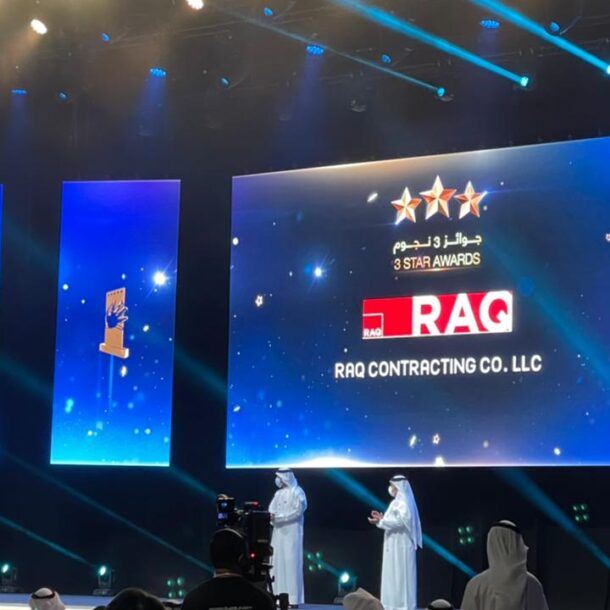